In 1928, community leaders decided to form an organization — Community Chest — that would raise and distribute funds for needed services in Fort Smith. And over the years, people have donated more than $52,975,000 to support health and human services within our area.

Originally there were 13 local charities that received funds. The campaign, which ran from May 7-12, raised $54,946 under the leadership of Community Chest President Marshall Yantis.

The Community Chest became the United Fund in the fall of 1962 under the leadership of Don Flanders. The United Fund included most or all of the individual campaigns previously made. The 1962 campaign had quite a kick-off with the Air Force “Thunderbirds”.

City National Bank (now BanCorp South) was the first to report a 100 percent employee participation with a total pledge of $3,629, with an employee average of $24 per person.

In 1977, Fort Smith started its annual United Way campaign with a raft race down the Arkansas River. Randy Ney, Campaign Chairman, set a goal of $600,000 to support the 20 agencies. 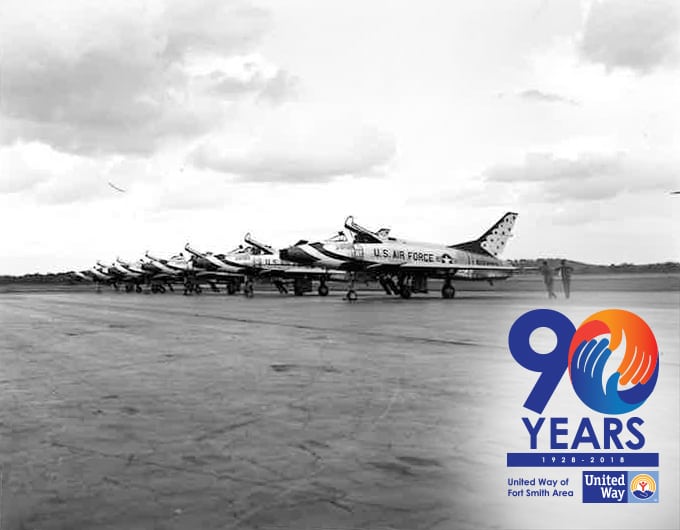 Originally there were 13 agencies with the number fluctuating over the years, then the number expanded to 29 with the addition of two agencies—The Fountain of Youth and the Boy and Girls Club of South Logan County.

In 1986, the admission of the South Sebastian County Youth Organization was accepted as an agency. This was considered a “bold effort.” by the United Way board—the first agency accepted outside Van Buren and Fort Smith.

In 2002, a campaign associate was hired to expand participation in the six counties the United Way serves— Crawford, Franklin, Logan and Sebastian in Arkansas and LeFlore and Sequoyah in Oklahoma.

In 1988, with W.K. McGehee, Jr., as president, the United Way held an open house at a new location, 320 South 18th. Still serving as the United Way Service Center, the building was bought and remodeled with private endowments, without one dime coming from any campaign dollars. In 2001, Beverly Enterprises donated partition walls and workstations to upgrade and improve four office spaces.

At United Way of Fort Smith Area, we believe that working together is the best way to measurably improve people’s lives in our six-county area. With your financial investment, you become a vital part of the United Way effort and have the greatest impact on improving lives by creating long-term and lasting change in conditions such as early childhood literacy, kindergarten readiness and homelessness.

United Way could not be successful in its efforts to help people in this area if it were not for the hard work and dedication of committed volunteers.